40th Anniversary with The Economist! 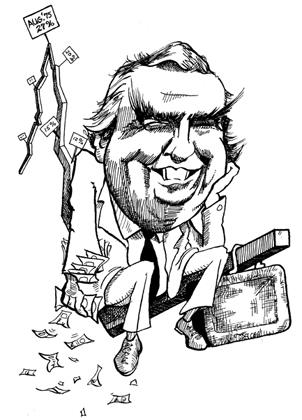 Today marks the 40th anniversary of my first cartoon appearing in The Economist. Here is an excerpt from my book Daggers Drawn that tells the story of that pivotal moment in my professional and personal life!:

I arrived in the lobby of the London offices of The Economist
in late March of 1978 for what I thought was my last shot at a
career as a cartoonist.

I had landed in England the June before as a recent college
graduate, leading a bicycle tour of American teenagers.
After months of pedaling in the British Isles, I (all 5’9″ of
me) managed to secure an unlikely position as player
and coach for the Brighton Basketball club.

While the team was winning on the court, it was losing
in the bank. The team’s financial difficulties forced me
onto the streets, literally. I put my experience as college
cartoonist for the Harvard Crimson to good use and drew
caricatures of tourists on Brighton Pier and in London’s
Trafalgar Square for a whopping £2.00 ($3.00) a go.

But now the basketball season was drawing to a close.
I had spent months visiting magazines and newspapers
in London actively searching for cartooning opportunities
with no luck. The Economist was my last stop before
I’d have to give up and return stateside.
While in the lobby, I eyeballed the magazine. It was evident
this was not going to be a good fit. In my portfolio were
comic strips, animation, and gag drawings. The Economist
was staid, grey and visually turgid. The only art worth
presenting was a series of published caricatures of obscure
college professors I had penned the year before.

To my surprise those drawings piqued the interest of
the Art director, Pip Piper. He asked to hold onto the
caricatures so that he could share them with members of
the editorial staff. A few days later I received a call from
Pip asking if I would come back to the London offices to
have a one day cartooning “trial.”

The night before, our team’s two-hour basketball practice
ended as scheduled at 10:00 pm. The lads and I then
dashed to the pub before “time, gentlemen, please” was
called by the landlord at 10:30 pm.

Over a pint or two, I asked my teammates to explain, in
the allotted time, the basics of British politics to prepare
me for my visit to The Economist in the morning.

Exasperated, the team recommended instead that I return
to my flat that night and switch on bbc’s “Newsnight”,
a topical current events program. As instructed, I sat in
front of the telly, pad and pencil in hand as Newsnight
featured an interview with the then-Chancellor of the
Exchequer Denis Healey.

I listened and sketched. Fortunately, Mr Healey proved
to be an excellent caricature subject whose generous
eyebrows were a particular gift. I completed a satisfactory
drawing of my first and only British politician before
retiring for the evening.

The next morning I sat nervously in the 11th floor offices
of The Economist awaiting my instructions. I had
exhausted all prior hope of landing a cartooning job in
the uk. I knew this was my one chance, one last chance
to make it.

Then the word came of my assignment. Would I please
draw a caricature of the Chancellor of the Exchequer,
Denis Healey.

That’s how it started.

That small drawing launched a long and happy marriage
of cartoons and words on the pages of The Economist.
Since that April day, I have published something near
4,000 drawings in the magazine.

I spent the next 10 years working in England contributing
weekly to The Economist. I would come to the same
St. James’ Street building every Wednesday drawing
caricatures of world leaders in pen and ink.

In a few years’ time I would be invited to create full colour
renderings that would grace the cover of the magazine.
Twenty years later, now working in the us,
I was honored to become The Economist’s first editorial
cartoonist, contributing a weekly satirical commentary on
world news.

Today I operate out of a studio in my home in suburban
Baltimore, Maryland. I arrived here in 1988 at the
invitation of The Baltimore Sun who had hired me to be
their daily cartoonist. I accepted the job under the one
condition: that I would continue to do my weekly cartoons
for The Economist. This was no small feat.

In 1988 there was this new thing, you may have heard
of it, called The Internet. Though no other artist had
tried, The Economist’s art director at the time, Aurobind
Patel was eager to embrace this new technology to
deliver my artwork from across the globe.

Our early experiments were not promising.

I would be required to drive an hour to Washington, dc
to scan my cartoon. The work would then be sent to New
Jersey where it would be outputted, scanned again then
delivered to an address in London where The Economist
would send a courier to collect. The results looked like mud.
Then we got a computer. A step in the right direction
as I now could scan the cartoon myself. However to
send a small black and white cartoon (about the size of
a typically email today) from my home to London could
take up to 3 hours… on international phone lines. An
expensive endeavor.

Over the next 25 years, things have become dramatically
faster and cheaper. Now, wherever I am in the world
I will send my cartoons to The Economist every
Wednesday. All I need is a laptop, portable scanner and
an Internet connection.

It has been an enormous privilege to contribute to
The Economist for all these years. I have worked with an
impressive and distinguished group of colleagues.
There are so many to thank for their contributions to
my long and colorful career. But none more than
Denis Healey.